by Christina Moutsou | Mar 26, 2021 | Reflections on life and practice 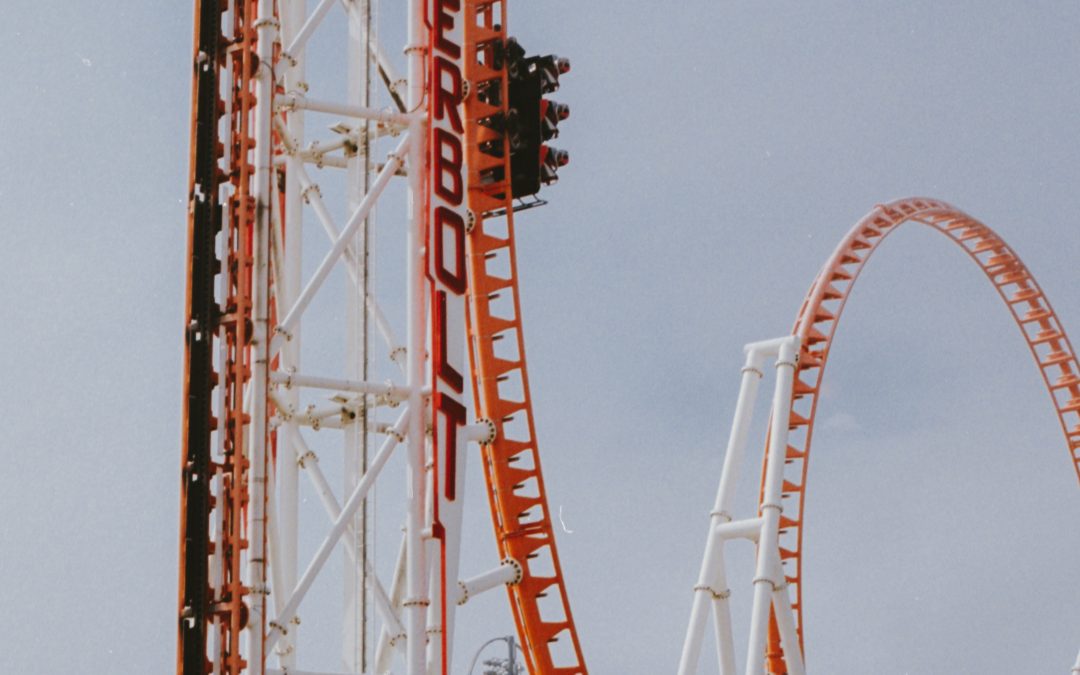 When I was little, I was not a typical kid in more than one ways (if one can ever really be a typical kid), but when it came to amusement parks, every possible childlike delight would be awakened inside me at once. I loved all the rides! The wilder, the better! In fact, some of my most cherished olfactory childhood memories come from a day spent in the amusement park by the sea promenade. Eating battered red mullet and chips (a Greek version of fish and chips), inhaling the bittersweet perfume of burnt sugar from the nearby candy floss machine, the scent of chargrilled corn on the cob in the summer and the musky steam rising from a hot tray of freshly roasted nuts. If I were to free associate about what cluster of scents I would describe as best representing childlike excitement and delight, it would be a combination of the above.

I still remember the first time that the pleasure stopped being unadulterated for me. It was the day of my first ride on the roller coaster, a new addition to the amusement park by the sea. I still remember vividly the sense of a pit in my stomach every time the train rolled down at a crazy speed and as much as I tried to hold on to delight, a new much darker feeling had cropped in; Fear. It may be that that first ride on the roller coaster took place at the time that things start changing in a kid’s life, in this period of time we now call the pre-adolescence, and anyway, the truth is that pure delight never lasts for very long. I think it is also likely that the roller coaster experience is too similar to what adult life feels like sometimes, and that that first experience of the downward ride left me with a pronounced unease in my stomach.

This week was the one year anniversary from the beginning of lockdown in London. There has hardly been any other time for a few generations at least that can be more aptly described as a roller coaster, but perhaps more accurately, as the ride of horror. There have been ups of course, and we have all collectively taken a deep breath in, expecting the good news to last and the ride to stabilise, but the next down has never quite been very far away, and it has almost invariably been more pronounced and horrific in its effects. The stories in the media about death, disaster, violence, abuse, unexpected loss and so on are endless. Yet, roller coasters are at their scariest, when one goes for excitement, but then discovers that the sense of void during the downward ride is unbearable, and that there is no way off the ride. I think this is what certain times during the last year have felt like for many of us. I will conclude this blog as a way of marking the anniversary with three brief fictional vignettes of life in the last year, which have felt like a wild ride to the character in question.

Nick left home for university in October 2019. He was so excited to be in London after a childhood spent watching rolling hills from his bedroom window in Gerrard’s Cross. In one of the freshers’ parties, he met Kate and the chemistry was intense. Very soon they were sharing his single bed at university hall. Then, the pandemic started and Nick’s grandmother who lived in London was one of the first victims of Covid. Nick could not visit her in hospital. He remembered how she lived nearby for the first few years of his life and how she would give him supper after school and she would always hand him a packet of sweets before his Mum picked his up. It was their little secret. He started missing home and his parents more and more, and anyway, London was no longer the same place. While he was contemplating whether to return home or not, Kate told him that it felt like they had lost their connection and maybe, it was time to move on. She was out of his hall of residence on the same day. Very soon after that, Nick was back living with his parents. They asked him few questions and he never told them about Kate. His granny was barely mentioned either. Nick found it increasingly hard to get out of bed in the mornings and to focus on studying.

Claire had received a significant amount as settlement after many years of working in the finance sector. She was convinced it was the right decision to leave her job, because of the worsening of her obsessive compulsive symptoms, which CBT therapy was ineffective in improving. She decided to take a year out to fulfil her lifelong dream which was to write a novel. Like with everything in life Claire was systematic and organised in how she went on about it. She did her research, picked the right creative writing group and recruited a suitable network of beginner writers on social media. She looked into publishing options and she set out a budget. A couple of months into her project and while everything was working according to plan, the pandemic started. Claire and her partner, Mark watched the news every night, speechless from the horrific scenes travelling from Italy. Claire found the sight of health workers wearing the full PPE and attending to patients on ventilators particularly distressing. Despite everything, she continued to work on her project diligently. Soon though, she was experiencing some new symptoms. Insomnia and debilitating panic attacks that would have her drenched in sweat with her heart pounding. Her OCD rituals intensified as an attempt to control the anxiety. Despite not working, the time she spent with Mark shrank, especially as she was also eager to hide her anxiety symptoms from him. Mark was caring, but rational and she didn’t think he would get it how sick she felt. The rituals started taking up several hours every day. She continued allocating time for writing diligently, but she found herself invariably staring at the empty page.

Steve is in his fifties. He is gay and not in a relationship. He owns a bar in Soho, his cherished baby, which he has nurtured over the last decade. The bar had to be shut at short notice because of the pandemic He finds himself alone at home after shutting his bar. Though some of his friends are happy to ‘break the rules’ and meet secretly, Steve begins to find a strange comfort in his solitude. He tells his friends he actually loves lockdown and he will meet them at the bar when it opens again. After all, what he truly misses is not the house parties that his mates invite him to, but the scene he has helped bring to life in his bar, the buzz, the dazzle, the connectedness. Now, he takes increasing comfort in watching TV shows and eating junk food. Watching horror and sometimes, porn while comforting himself with food and masturbation whenever he feels like it is a thrill. He does no longer need to care about keeping track of time. He doesn’t even care about his weight any more, as he is not planning to be on the scene any time soon. Steve has been experiencing chest pains, which he put down to trapped wind. One night while sat on his comfy sofa across from the TV, the pains starts squeezing his entire chest. It is like he is wearing a very tight corset. He is struggling for breath. He has to face up to it, the feeling of impeding doom, the premonition that death is around the corner that he has been waking up with every morning. He tries to reach for his mobile at the coffee table, to call 999. Blank.