by Christina Moutsou | Feb 5, 2021 | Reflections on life and practice 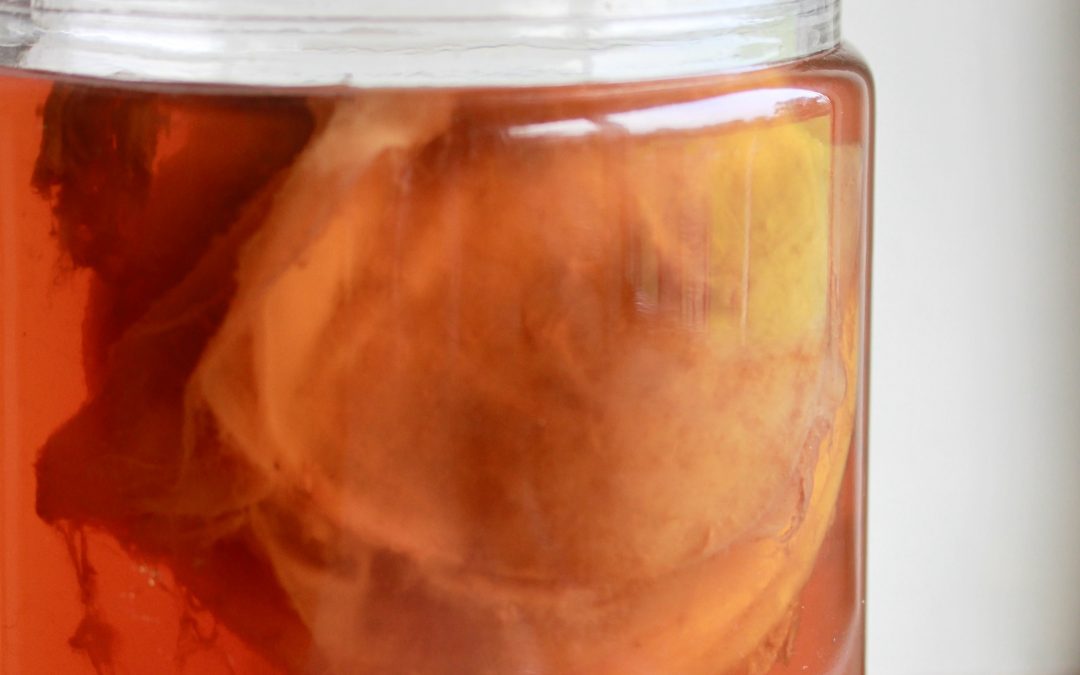 The first lockdown in the spring has been marked in my mind by the discovery of the scoby (acronym for: symbiotic culture of bacteria and yeast) and the making of kombucha, a fermented fizzy and fruity tea. For the last year, there has been a distinct contrast in our kitchen between the pronounced absence of visitors and the plethora of bottles brewing the latest fermentation experiment. The moment I had to pack for a longer than usual summer break, and I had felt, despite also feeling frantic, compelled to do an extensive internet search about how to preserve a scoby for six weeks, I knew that I was dealing with a newly acquired addiction. Delving into the depths of my unconscious, brought up a remarkably visible similarity between scobys (a yeast coloured, slimy round disc with several spots of discolouration and an irregular surface) and the placenta, so my best bet was that the brewing process had become symbolically for me like a prolonged pregnancy, like holding on to the hope of an eventual live birth through feeding the scoby, which would then produce the flavoursome brew.

I have just finished reading Maggie O’ Farrell’s Hamnet, a historical fiction novel which came out right at the beginning of the pandemic and which has already received much acclaim and, like others, I have been in awe of O’ Farrell’s writing. I have been even more in awe of how highly topical the themes she touches on are. There are several intuitive threads running through the narrative between the outbreak of pestilence in 16th century England and our current situation. This is the story of eleven year old Hamnet, the son of William Shakespeare and his wife, Agnes who is also the main character. Hamnet dies of the pestilence, which was effectively a bacterial infection. In one of the chapters, O’ Farrell describes eloquently how the pestilence spread through nautical travel around the world and through contact between humans and between humans and animals. Agnes, mother of Hamnet, his twin sister, who is the first one to conduct the disease, but who her mother manages to save through her remedies and care and an older daughter is an eccentric young woman who collects herbs and plants and makes remedies. Her own mother has died in childbirth giving birth to her little brother and it seems like Agnes’s intuition and psychic ability to connect with what is going on in the minds of other people and to see beyond the surface are also a way of keeping in touch with that lost mother. She has a strong intuitive connection with animals and nature. What I found the most heart breaking scene in the book was the moment she realises she will not be able to save Hamnet, despite her remarkable ability to heal with her remedies. This is also the moment she realises that despite her extraordinary intuition, she had not seen what was coming, that her only son would die and that there was nothing she could do about it.

For the last year, we have lived in a painfully polarised world. We have witnessed an increased split between those who pushed for safety and regulation and those who protested about the loss of freedom, those who have wanted to speed up the vaccination process and those who have been suspicious of it. It is hard to remember or even to comprehend while we are all driven primarily by fear and paranoia that bacteria and viruses can kill and destroy at astronomical speed, but also, that populating our gut with good bacteria as well as being exposed to viruses through close contacts is connected with the process of staying alive and healthy. Wine, for example, is one of the most ancient and culturally rich fermentation processes known to human kind. It is also well known that there is a significant link between the regular consumption of wine and longevity. Of course, if certain people’s upbringing is dominated by deprivation and the absence of affectionate bonds, wine can prove a lethal addiction and also, the ultimate death of their relationships with others.

Going back to my kitchen, other than kombucha, which has now expanded, thanks to a gift from a friend, onto two separate fermentation vessels, one scoby feeding on sugar and black tea and the other on honey and green tea, I have also tried my hand in kefir and yoghurt making, sourdough bread, greek koulouri bread, which is a type of bagel, Sri Lankan pickles, and dosas, whose batter also needs to ferment for thirty six hours. Has my preoccupation with fermentation processes unwittingly been a hopefully creative response to the fear about all the other viral and bacterial spreads around me? Has it been an attempt at defying the odds like Agnes, an attempt to brew life in any way I can rather than succumb to the deadly fear around us and the ultimate fermentation of death? I very much hope so!