by Christina Moutsou | Aug 6, 2021 | Reflections on life and practice 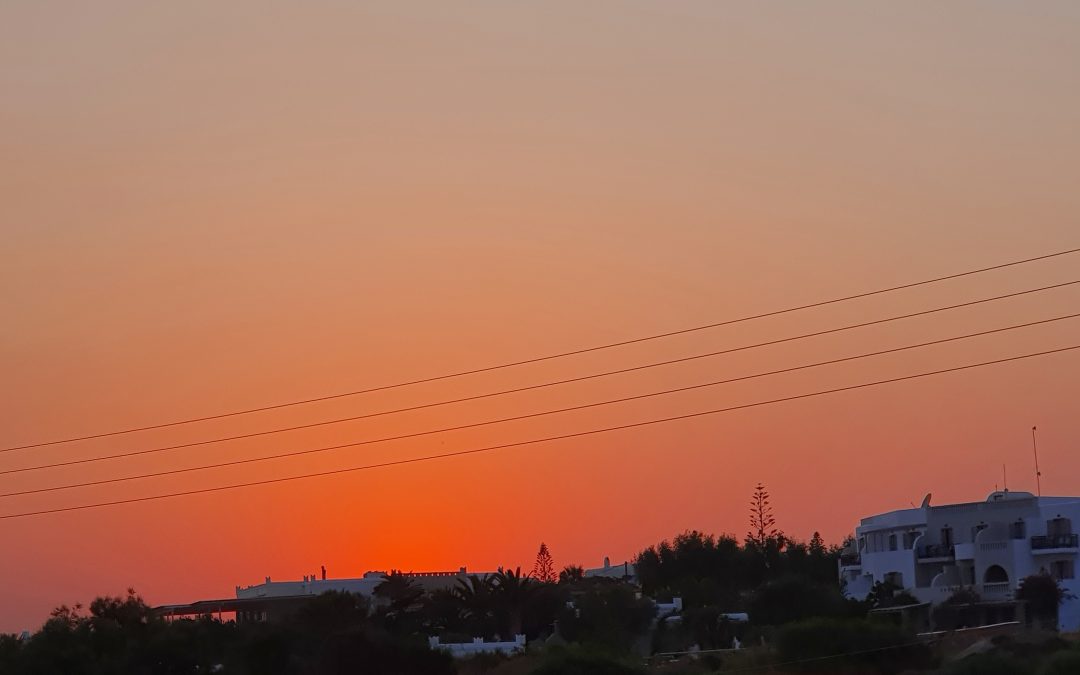 While on a family holiday on a beautiful island in the Aegean, it is hard to miss how the planet is in a dire state. The temperatures have soared to an unprecedented degree, and while a heatwave may be considered ‘normal’ during a Greek summer, temperatures above 40C are rare, especially on the islands. It is a common consequence of this to see wildfires spread quickly, and after that innumerable scenes of devastation ensue. Looking at the horizon today, the atmosphere feels heavy and ominous and it is not clear if this is the result of the wildfires still uncontrolled in Athens or if we all sense the culmination of worldwide destructiveness in the last few years. The world has suffered a number of tragic events, leading to increasing polarisation and the rise of violence and fascist tendencies. I remember thinking when Brexit happened that there could hardly be any worse than that, and yet, so many other disasters have followed. Here is a short story about the pain of division and the desire to be at one with ‘Mother’ nature.

Since before Chloe could barely use words, she tried to signal to her mummy how she didn’t like hot climates, how she didn’t like that desert like country she took her to every summer. And they stayed there for far too long. Her list of the things she didn’t like was far endless. The biscuits tasted too sweet, the butter was white and not yellow and the toast it was spread on just had the wrong texture. The houses also smelt funny like a mix of dust and coconut sunscreen and clothes washed in washing liquid that was far too fragrant. Later on, Chloe had watched on TV an episode of Outnumbered where Ben was throwing a tantrum pretending that his Dad was a stranger trying to abduct him. It crossed her mind to do just that next time her parents decided to take her away for the summer from the rain and the wet grass she loved, where she felt one with nature, where she never had to be sweaty and hot, where there were no stray dogs suffering in the streets, where everyone was polite and kind, even if they didn’t feel like it, where it was frowned upon to be shouty and angry like everyone was in her family. It would not even be a pretend game. Chloe felt like every summer she was being abducted.

The change in family life was hard to miss since Chloe was born. English became the lingua franca for all of them and going anywhere, especially leaving the country, was much more difficult than before. Her GP had warned her in one of her late pregnancy visits that having two children feels more like having four. She thought at the time she was trying to spoil her excitement about expecting a second baby who would also happen to be a girl, the child that would complete their family. Yet, her GP had probably talked from experience and her uttering had come back to Maria’s mind several times in the first couple of years of raising two toddlers with little help. Yet, as she told Andreas several times, part of the problem was that Chloe was really not a traveller. She used to call her kitten and the choice of pet name was not a coincidence, cats were territorial and they mostly hates to travel just like Chloe.

By the time Brexit happened, they had actually mastered a number of family holidays, and in fact, Maria thought they had cracked it with Chloe. For a child with such strong personality, a child that was both deeply endearing and infuriatingly stubborn, the shift was significant. At the age of nine, Chloe would occasionally ask what their travel plans were and even suggest new destinations. Yet, the one place she would never express any desire to visit was the place Maria still considered home. In fact, the day of the referendum was the only day Maria had taken off work since returning from maternity leave. She was far too aware what working in a caring profession meant, a significant part of the care offered was turning up and being there. Yet, the day of the referendum results Maria felt a splitting crack inside her. She imagined it like an earthquake dividing her internal world into two, the land where her children were brought up and the land of Europe she still inhabited inside her mind. Before Brexit, there was a nice bridge that helped her flow effortlessly between the two lands, now she could almost see Chloe standing on the wet, grey island waving her goodbye, as she made her way out of being condemned to being a foreigner.

Chloe could not understand how Mum could be the person she felt so naturally connected to, like a cord kept them in tune with each other, even at the times they could not see eye to eye, and yet, Mum was also the person who hated her home, who complained endlessly about the weather and the darkness and heaviness of Victorian houses (how could she really complain about the only house Chloe had inhabited since birth?). She had tried to explain to her how there were few things as cosy as snuggling up with a hot water bottle on a chilly day, but Mum seemed to dream of warm seas and strong sunshine that burnt your skin and where there was nowhere to hide. How could they be so tuned in even though Chloe loved the night and Mum came alive at the crack of dawn?

When Chloe hit nine, everyone talked about Brexit and then the Grenfell Tower. Maybe then was the first time that Chloe thought life in London was not just fresh green parks and cuddling with pets and jumping as high as possible in paddling pools. Around that time, a strange thing happened. She started missing their summer holidays in her parents’ desert country. It occurred to Chloe that memory played strange tricks on her, as the things she started craving were exactly the things she hated when she was little, the sweet, vanilla scented biscuits, the sheets drenched in the over fragrant detergent and the unbearably hot afternoons, when she would meet her godmother briefly in loud and busy city cafés. It is just that she would never tell her parents she had started looking forward to her summers in Greece, as, who knows, maybe they would decide to take her there for ever and then, Chloe would be inconsolable, as home, after all, was only one.