by Christina Moutsou | Aug 12, 2022 | Reflections on life and practice 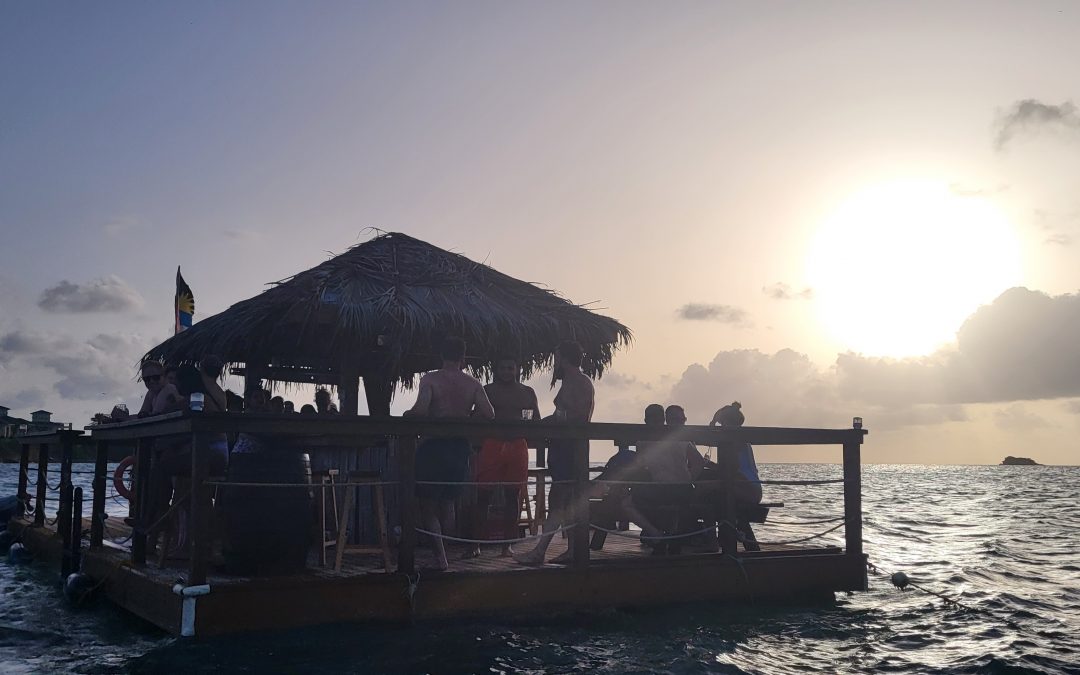 Continuing the holiday trend of fiction writing, below are some excerpts from my second short story taking place during the Pandemic. More to follow!

…He brought himself back to the present as he discreetly steered away from the drunken group and found a place on a stool in the bar. Before he had time to make an order, a Negroni was placed in front of him. He shifted uncomfortably in his seat and his foot caught on something sharp. Looking down he realised that a bar from the stool had gone missing and a rusty nail was sticking out. My God, this place was really falling apart. Before allowing himself to worry that he had not had a recent tetanus jab, he discreetly rubbed his ankle with a little of his Negroni, only to confirm his suspicion that it was super strong; the spot where his skin had been broken stank badly.

You strike me like a Negroni type of lad, the beaten from the elements barwoman slurred her words. But if you don’t like it, I can make you another drink, no probs. On the house as well.

She winked. For a moment, Kostas felt rising panic that she was making a pass. After managing to navigate away from the crowd of drunk tourists, now this. He had not noticed before that being on the floating platform could become a claustrophobic experience; nowhere to go if it became unpleasant, unless he was prepared to leave behind his house keys and mobile of course and swim to the shore. Kostas was a strong swimmer and not phased out by such prospect, even on a day northern winds blew hard like today, when the currents were particularly strong and the wood planks sighed almost like in pain with every wave that rolled below the old platform.

In the early days, Pell and he loved waiving the small motor boat that brought them here and then, after they had their drink, waiting until there was a sufficient number of people to fill the little boat for its short trip back to the shore.

It is the journey that matters, not the destination, Pell used to laugh slightly tipsy on their way back, resting her head on his shoulder. In fact, it was her head on the crease of his shoulder when lying in bed together that Kostas missed the most these days.

The slightly nauseating claustrophobia quickly faded away, as his noticed the barwoman turn her back to him swiftly and slur her words and wink to the next customer. He sighed in relief…

Soon enough she was back asking him if he wanted another drink. As a matter of fact, he has only had about a third of it, as going slow was the only way not to let it get to his head. She was a slim middle aged English woman with platinum blonde hair held back by a white ribbon matching her bright white tunic which was kept impressively pristine despite her drunkenness and blue eyes buried in a forest of extended eye lashes,. Her skin had given in to multiple creases that the harsh sunlight and continuous spray of sea water had sculpted in and her botox lips were sadly too obvious to be remotely sexy. Kostas felt sad that she must have once been a true beauty, but not quite ever loving herself to see this in her mirror, and, as it often happens with women, her self-hatred had won over her looks eventually. This was something he was privy too not just through his work of course, but through the one woman he had loved from the beginning of adult life. Was Penelope’s self-hatred also winning over for good?

No, one drink will do for me, he dared to smile back now as he was less worried she would be pursuing him further. Besides, I saw how much gin you put in there!

He pointed at a large jar at the other end of the bar, where she had been pouring far too much gin and a little Campari for the drunken tourists. It was the first time he was noticing this feature in the bar, though it could have easily been there before. A huge metallic penis hang above the jar and acted as a stirrer for the cocktails. Decadence galore was reigning in the floating bar. A true prime example of disinhibition, Kostas thought. It was then that he registered what was different today. How could he have missed it for all this time?

Where is your colleague? he asked the barwoman. He stopped himself from saying ‘partner’ as it was only an assumption he had made before that the two were a couple. It was always the two of them serving drinks in the floating bar, the blonde English woman and a Dutch man, who had in fact, decorated the bar with pictures from the Amsterdam canals. Those were gone as well! How could he had not noticed!

My colleague? Where is he? She repeated in trembling words. Was she teasing him now for choosing such a formal word for what effectively was a job or creating conviviality through self-destruction? She turned her back to him and seemed to ignore him. God, had he offended her in some way. She then swung back and flicked ash from her cigarette in a wooden pot.

This is where he is, she said tapping the pot.

Kostas reflected on this moment after he left the floating bar and for many days after. To begin with, he did not understand what she meant and felt embarrassed and lost. Yet another moment to confirm that the floating bar had lost its magic. He could see that whatever she had wanted to convey, she clearly had no words for it…